Mining for gold after kicking out the Tibetan nomads

The establishment of protected nature reserves is a time-tested method of asserting state authority over territories and peoples that were previously subject to weak control. Whether it is in the name of protecting tigers in India, forests in Central America or headwaters in Tibet, the creation of protected parks come with coercive laws that limit the rights of people who live in and around the designated area.

Often the discourse on protected parks portrays them as benign environmental projects. However, on the dark side, protected parks and nature reserves frequently introduce mechanisms for social control and facilitate resource development and eco-tourism plans. It is little wonder that between 1980 and 2003, China has established 70 nature reserve parks in the Tibet Autonomous Region.

One of the most controversial nature reserve areas on the Tibetan Plateau is the San Jiang Yuan Three Rivers Headwaters Nature Reserve (SNNR), formed in 2000 to protect the sources of the Mekong (Zachu), Yangtze (Drichu) and Yellow (Machu) rivers. At the heart of the controversy is the relocation and settlement of tens of thousands of pastoral nomads into camps reminiscent of those built for First Nations people in North America.

The socio-cultural disruption caused by the resettlement projects is so severe that Andrew Fischer from the Institute of Social Studies, Erasmus University, recently raised the point that the locations of recent spate of Tibetan self-immolations correspond, “with a few exceptions”, to areas of intensive resettlement. (To digress a little: In the same issue of the journal of Cultural Anthropology, Emily Yeh and Tsering Shakya observed how the Tibetans represent a group of people that the state is allowed, by its unquestioning citizens, to use brute force and violence upon.)

This blog post, however, is more specific to the SNNR. It builds on the questions raised in a previous blog post in which the first publicly available map of SNNR was released. These questions concern around the strategic motives of establishing nature reserves, the problematic use of scientific discourses, and on China’s commitment to environmental protection in relation to its development goals. Specifically, this post provides new information and analysis, which show that conservation is secondary to resource development projects in the SNNR area.

CHANGING THE BOUNDARIES OF SNNR
The map of SNNR first published on this blog was mainly based on a map of SNNR published by the Qinghai Forest Bureau in 2004. The SNNR is composed of 18 subareas. Each subarea is divided into three zones: a Core Zone, a Buffer Zone, and a multiple-use Experimental Zone. What follows in the rest of this post is evidence that show that the boundaries of at least one of the SNNR subareas have been changed. Available information indicates that the changes have been made, amongst other things, to allow gold mining in the region.

The Yuegu Zonglie is one of the Wetland Conservation Subareas of SNNR. Located to the east of Kyaring and Ngoring lakes. This subarea covers the uppermost headwaters of the Yellow River, and is critical to the SNNR project, which aims to prevent ongoing deterioration of the sources of the Yellow River.

If we overlap the 2004 map on Google Earth image of the region, we can see trenches (marked with pins), indicating mineral prospecting, within the Buffer and Experimental Zones of Yuegu Zonglie subarea of the 2004 map. These trenches are protected environmental zones from where people were to be resettled. The policy assumption is that nomad’s herds were responsible for the deterioration of the grasslands there. 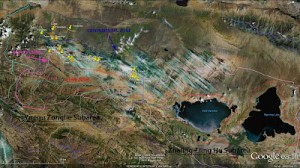 Figure 2) A Google Earth Image showing the 2004 boundaries of the SNNR and the locations of streams (turquoise) and evidence of prospecting (yellow).

The trenches in the north of Yuegu Zonglie subarea belong to Inter-Citic, a Canadian mining company. The proposed Dachang Mine, with its processing plant and tailings, would be 12 kilometers upstream from the Core Zone, and there is evidence of prospecting as close as 4 kilometers to the Core Zone. We can also see on Google Earth that the grasslands has been severely damaged by Inter-Citic’s exploration work, far beyond anything nomads’ herds could ever do. Inter-Citic’s 2004 technical report acknowledges that its Dachang prospects “appear to be within an environmentally sensitive area around the headwaters of the Yellow River.”

However, in 2009, Inter-Citic published another technical report with a map of SNNR, showing their Dachang property completely outside of SNNR. The 2009 technical report states “Dachang is located proximate to but outside of the Sanjiangyuan Nature Reserve”, and “The location of the Dachang concession is north of the outermost boundary of the Sanjiangyuan EPZ as described in the Sanjiangyuan Nature Reserve Environmental Protection and Development Plan approved by the State Council on January 26, 2005”. Between March 10, 2004, the date of the 2004 technical report, and January 26, 2005, the date of the approval for the SNNR plan, the SNNR boundaries that affected the Dachang gold project and nearby gold prospects were changed. 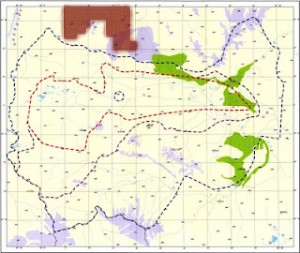 The new boundaries now exclude the sources of the Yellow River, where the gold mines are to be situated, from SNNR, and includes new rivers, which are not a part of the watersheds that SNNR is supposed to protect. It appears the changes in boundaries are made in such a way that the total area under protection remains the same before and after the change. 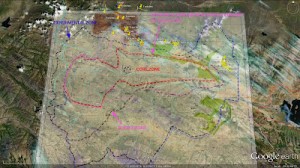 An examination of the extension of the Experimental Zone to the west of the Core Zone reveals that the river (drawn in turquoise in the figure above) to the west of the Core Zone flows north into the Tsaidam (Qaidam) basin. It does not flow into the Yellow River, the Yangtze or Mekong, the rivers protected by the SNNR. Extending the Experimental Zone in this direction has no bearing on protecting the headwaters of the Yellow River.

In contrast to the useless rivers added to the subarea, the rivers near Dachang and other gold prospects taken out of the SNNR flow directly into the Core Zone. The 2004 Buffer and Experimental Zones would have protected the Core Area from the inflow of industrial waste from the North, where Inter-Citic and the Qinghai No. 5 Geological and Mineral Exploration Institute plan to create an open pit mine and build an ore processing plant. These will require hundreds of workers and extensive supporting infrastructure, resulting in, needless to say, severe pollution of the Yellow River at its uppermost sources.

THE OTHER REALITY OF NATURE RESERVES IN TIBET

The documentation and analysis provided above demonstrate that China’s plans to protect the headwaters of SNNR is a sham. This is also an example of what happens in the name of protected nature reserves in Tibet in general and what is likely to happen more frequently in these protected areas in the future. For example, government reports announce discovery of major gold deposits in the area, and that there will be further changes to SNNR Experimental Zones to boost incomes in the region. The Songpan-Garze gold belt, within which Dachang is found, runs through another nature reserve in Qinghai Province, the Hoh Xil reserve, which was created to protect the Tibetan Antelope and other endangered wildlife. Recent reports also mention that geologists are currently carrying out exploration in Hoh Xil reserve area, just to the west of the Dachang region. 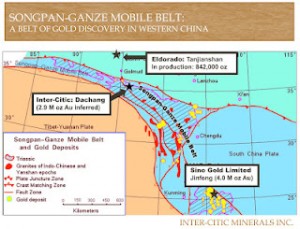 This entry was posted in MEDIA & PRESS, NOMADS & GRASSLAND and tagged Removal of tibetan nomads and mining. Bookmark the permalink.